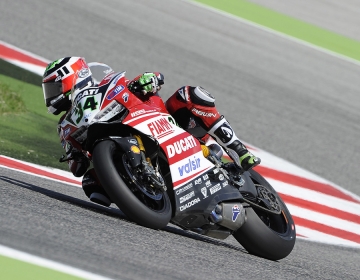 The results of the World SBK Championship - Misano round

Yesterday, June 22nd, saw more than 900 partners and Valsir, Oli, Raffmetal and Fondital employees who watched the races at the Misano World Circuit of the second and final Italian round of the World Superbike Championship 2014 from the dedicated grandstand.

It was possible to feel the excitement of the races: paddock passes for some,  the Valsir-Ducati grandstand for others, on one of the most exciting racing circuits in order to live a day of pure Italian passion on two wheels. 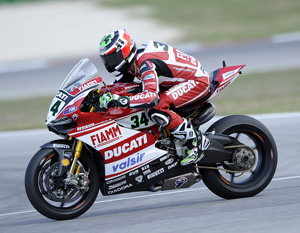 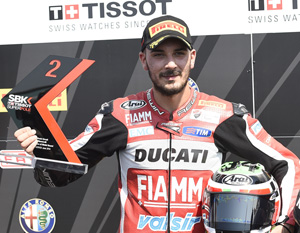 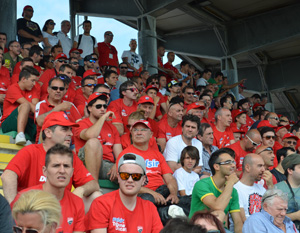 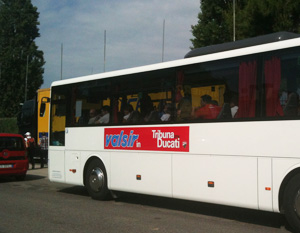 The "Valsir Ducati Grandstand" Event was an exciting experience for many: in addition to the Italian partners and employees a full bus arrived for the occasion all the way from Hungary!

After a good performance for both Ducati riders during tests and qualifications, the two have had an unexpectedly difficult day due to some technical problems: Chaz Davies finished fourth in the first race, retreated from the second after a fall; Davide Giugliano has instead finished eighth and ninth.

The first race was held in good weather conditions and saw Tom Sykes (Kawasaki Racing Team) win their first race at the Misano World Circuit, who dominated the competition and crossed the line ahead of team-mate Loris Baz. Marco Melandri (Aprilia Racing Team) completed the podium, after fighting with Chaz Davies (Ducati Superbike Team) for the third position. Due to some technical issues, Davide Giugliano crossed the finish line in eighth place.

The second race was dominated again by the reigning champion Tom Sykes (Kawasaki Racing Team) who completed the double win at the Misano World Circuit "Marco Simoncelli" followed by his team-mate Loris Baz second and Marco Melandri third, the same podium as in race one. Giugliano got off the line extremely quickly to first position then received a ‘ride through’ penalty as his start was considered to be a jump start. As a result the Ducati man went from first to seventeenth position after completing the ride through on lap five. He immediately fought back, closing in final ninth position. Chaz Davies too started fast and was lying fifth by lap four, he then suffered a crash. The British rider decided to get back on track, he was down in 24th position and after a few more laps withdrew from the race due to technical issues.

After seven of fourteen scheduled rounds, Davies holds sixth position in the general standings, with 143 points, while Giugliano is seventh with 111 points. Ducati lies fourth in the manufacturer’s classification with 178 points.

“Fourth in race one wasn’t bad. In the final stages I was riding at the limit and although I got close to Marco at one point, he was able to pick up the pace at the end and I couldn’t match that. I’m a bit frustrated about the time I lost at the start when Elias ran off track – he was right in front of me and I was forced to brake. In race two I had a bit of a strange feeling with the front of the bike right from the start. We hadn’t made any big changes between race 1 and 2, but I guess the higher temperatures caused the change in feeling. The problem is that you need to get away strong and stick with the front guys - if instead you have to push to make up lost ground the tyre deteriorates more quickly. I also had a damaged footpeg after the crash but I stayed out until we were two thirds of the way through the race, just in case there was a red flag for any reason. After 15 laps I decided to come in, also because coming in meant the engine did a few laps less.”

“It was a tough day. In practice we hadn’t tried the other rear tyre, the one that many of the other riders used, because the lap times recorded on the used tyre were consistently good in the practices. Unfortunately it was a very difficult race, I had a lot of vibration at the rear and the grip really dropped off in the second half. Then in race 2 I made a mistake – in trying to start as well as possible I did too much and made a jump start. I wanted to get away as fast as possible and not get trapped in traffic like in race 1, and from the pace I had through the first laps I know I could have done that. A pity, as the tyre was working well and I was happy with the bike. I’m sorry for both me and the team, especially on a weekend in which we were constantly fast in every session. We are continuing to improve and I’m certain that it’s only a question of time before we are able to bring full satisfaction to the team, Ducati and all of our supporters and fans.”

More in this category: « The new Valsir website is online! The Valsir soundproof systems on the front page »
back to top