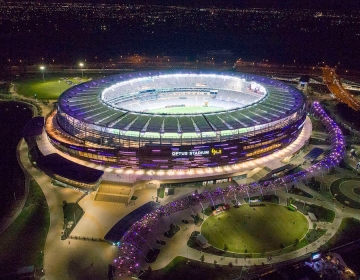 With its 60,000 seats, Perth Optus Stadium is the third largest in Australia. But it’s the innovative design and technology used for its construction that earned it a major award: the Prix Versailles 2019

For its architectural complexity, innovative design, technology used in construction and impeccable attention to detail, the project was given one of most important international awards, the Prix Versailles 2019 - World Architecture and Design Award.

Valsir also made a contribution to this achievement, with the installation of 1,000 Tropea S flushing cisterns, the top of the range on the market.

The stadium is a multi-functional facility that can host major sporting events, as well as cultural events such as concerts and big shows.

An unprecedented feature is that spectators never have to miss a moment of the match.

This is possible thanks to two 340 m2 maxi-screens placed on either end of the stadium and more than 1,000 TV screens installed inside.

Another aspect given priority is security, including a police station on site, 650 closed circuit cameras around the stadium and numerous metal detectors.

Technology, innovation, function: the same characteristics we put in our product has earned the Perth Optus Stadium this prestigious award.

More in this category: « THE SINGAPORE GREEN BUILDING COUNCIL PROMOTES VALSIR Valsir Excellence of the Year Hydrothermosanitary Innovation & Leadership »
back to top