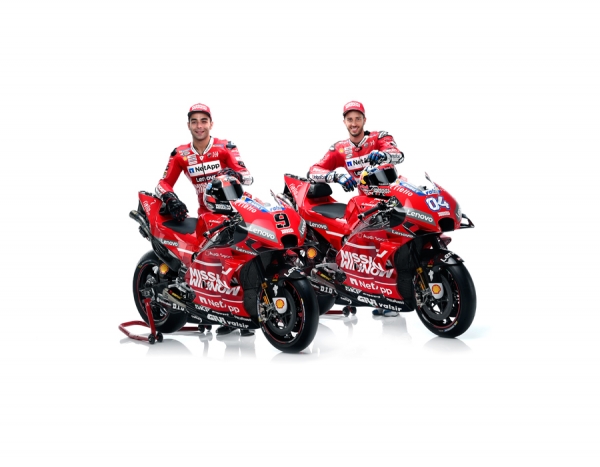 Valsir and Ducati together to win in search of new boundaries.

It was officially announced on Friday in Switzerland and we could not wait to announce it: Valsir® will be a Ducati sponsor also for the 2019 MotoGP Championship

On stage Andrea Dovizioso and Danilo Petrucci presented the new Desmosedici GP, a concentrate of technology, power and aerodynamics. Valsir will be back alongside Ducati for a championship to be experienced in one breath.

"The determination of the team to improve race after race, to always think in an innovative way and constantly seek new boundaries in technology is a perfect example of what Mission Winnow means," said Miroslaw Zielinski, President of the SME Science and Innovation Division.

The new Desmosedici GP has all the features to achieve important results. With a maximum speed of over 350 km/h and a weight of only 157 kg it releases a maximum power of over 250 CV.

In the saddle two great riders who will try to bring Ducati to the top of the standings. 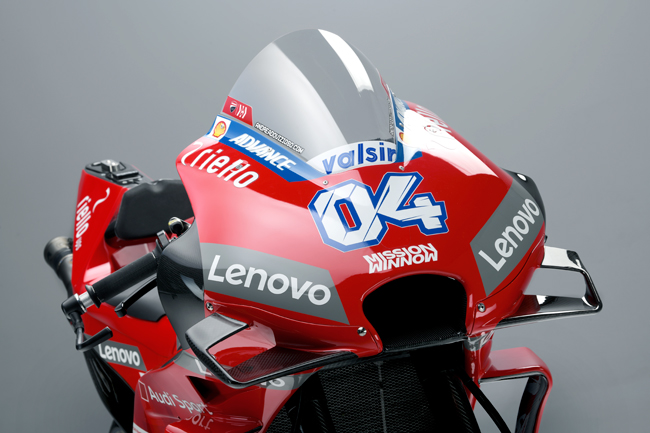 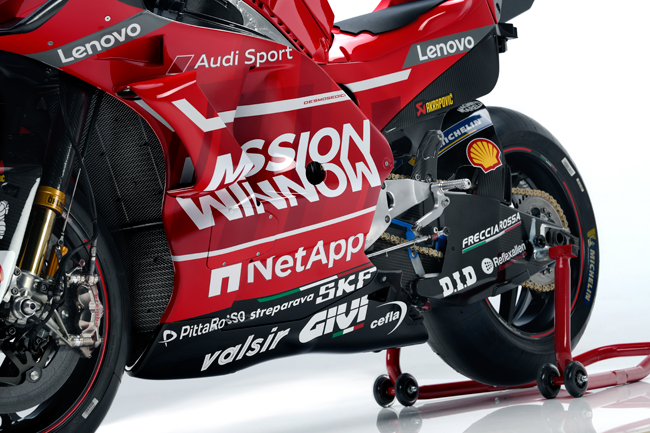 After finishing the last MotoGP season as runner-up for the second consecutive year, with four wins (Qatar, Brno, Misano and Valencia) and nine podiums overall (a personal record in the top class), Andrea Dovizioso is ready to challenge for the title once again, with even more experience under his belt. 2019 marks Dovizioso's twelfth season in MotoGP, and seventh in Ducati colours, where he will be joined by Danilo Petrucci.

Over the past four years with the factory-supported Pramac Racing Team, Danilo Petrucci enjoyed a steady growth as a rider. After showing promise in 2015 and 2016, he stepped up to the challenge by taking four podiums in the 2017 championship on a latest-spec Desmosedici GP machine, identical to the ones of the official riders: he was third at Mugello and Motegi, and second at Assen and Misano, finishing the season in 8th place with 124 points. Last year, the Italian took second place at Le Mans and, with 20 more points to his tally compared with the previous year, earned a position with the Ducati Team alongside fellow countryman Andrea Dovizioso. 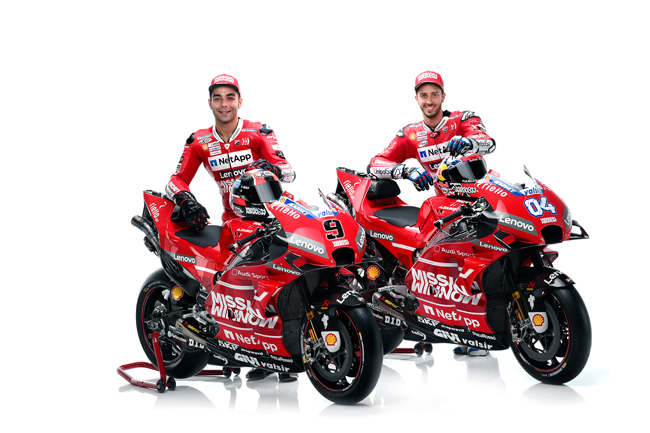 It starts on Sunday 10 March in Losail, Qatar. The landscape will be the Losail International Circuit for a spectacular night race.
We and Ducati are ready to get on track with the mentality of all time: to give the maximum conviction that only by working together and taking care of every detail can you get great performances. 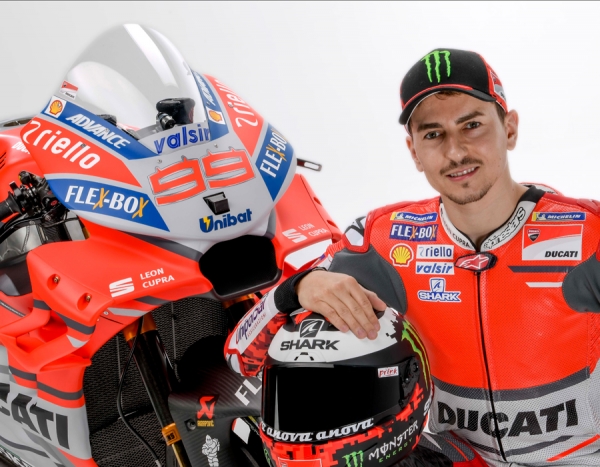 Valsir with Ducati in MotoGP and Superbike

Valsir has announced today its renewed collaboration with Ducati, a strong relationship between two companies that base their roots in the “Made in Italy” – a synonymous with passion, innovation and quality. The plumbing and heating brand and the Borgo-Panigale-based team are always pursuing excellence and they have earned an international reputation over the years for achieving extraordinary goals.

Thanks to this Partnership Agreement, the Valsir brand will be on the push rod of the new motorcycles, on the drivers’ suits of the MotoGP – Andrea Dovizioso and Jorge Lorenzo – and the Superbike – Marco Melandri and Chaz Davies – and on other Ducati Corse merchandising in the paddocks of all the 32 scheduled races and for the official tests. 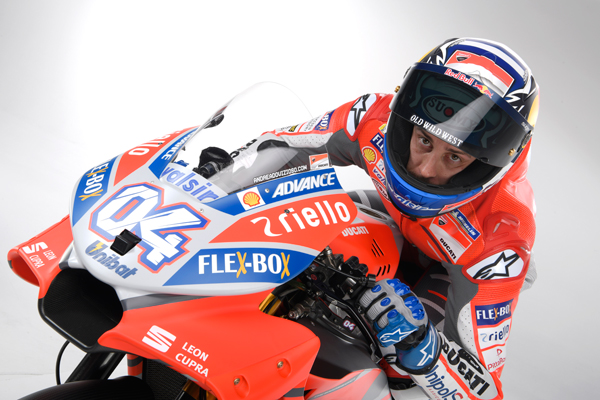 In addition to what has already been defined, Valsir is thinking about projects and initiatives aimed at involving Ducati fans – customers, influencers and collaborators – who will see these two important and prestigious brands together.

«We are very satisfied and proud to continue our partnership with Ducati Corse; a collaboration based on respect and mutual enthusiasm. I have always been a Ducati supporter and I follow their innovations with interest and passion" – commented Simone Niboli, Director of Marketing in Valsir. – "Our two companies are synonymous with research, technology and commitment to work and on their specific fields of action, each company faces great global challenges with courage and determination. Valsir and Ducati, ambassadors in the world of Made in Italy, are strongly determined to be protagonists during this 2018 too».

«For us Valsir is an extremely important partner, which started its partnership with Ducati Corse 10 years ago. We began with Superbike and this year we are together in MotoGp too” – claims Paolo Ciabatti, team manager of Ducati Corse – “we are very satisfied having Valsir as a partner and we will work hard to return their confidence and support during the whole 2018 sport season» 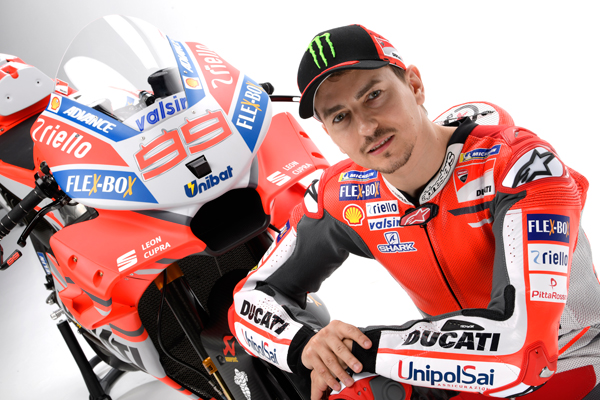 Concerning the innovation and technology, Valsir guides the challenge of the building sector and civil engineering works by investing in sustainable solutions that are characterized by high comfort, safety and durability. Valsir is also involved in the dissemination of technical culture and the digital building revolution through Valsir Academy, proposing conferences and workshops aimed at all professionals and operators in the sector, such as designers, architects, plumbers and contractor.